Midlands based forklift truck sales and service provider, Compact Fork Trucks, are no strangers to the Hyundai brand and already have a large existing user portfolio which they have built up over a number of years. With an ever-growing demand for Hyundai equipment, Compact Fork Trucks decided to sign on the dotted line and are now the official Hyundai Material Handling importer for the West Midlands area. Compact Fork Truck’s key deciding factor was purely customer focused - improve their customer journey through direct access to Hyundai’s recently completed training academy, technical support and parts centres all located in Belgium, Europe.

After a comprehensive procurement exercise Telford based masonry manufacturer, Besblock, purchased a 70D-9, 7,000 kgs diesel forklift truck from Sales Manager, Greg Silvers. The company were so impressed with the mighty machine they have recently placed an order for another 70D-9 which is currently on route via cargo ship from Hyundai’s Belgian European Headquarters.

Mr Silvers explained, “I have been selling forklift trucks within the Midlands area for over 13 years and have driven past Besblock’s factory on many occasions. In the last few years I have built up a relationship with the team and an understanding of their operations. The requirement for an additional truck soon arose and the brief was simple; a robust and reliable forklift capable of safely operating in the busy environment of the UK’s largest concrete block manufacturing plant.”

Mr Silvers spent much time on site carrying out full site surveys to better understand their application, he said “Productivity and operator comfort were key priorities, Besblock operate on a 24/7 basis and the drivers literally don’t stop! Unlike their previous machine that required regular ‘downtime’ of up to one hour to regenerate, the 70D-9 has an AdBlue system meaning no valuable working time is lost. Driver comfort also needed to be addressed, working a whole shift without leaving the cabin meant it was essential to have an extremely comfortable working environment.”

Besblock’s truck is also fitted with a bespoke integral ‘double block clamp’ for handling large packs of blocks, manufactured by Fabcon Engineering based in Dungannon, Co. Tyrone, supplied by WESCO Engineering Services, located in Somerset and coordinated and fitted by Compact Fork Trucks in the Midlands. The same process will follow with the new machine when it arrives in the UK. 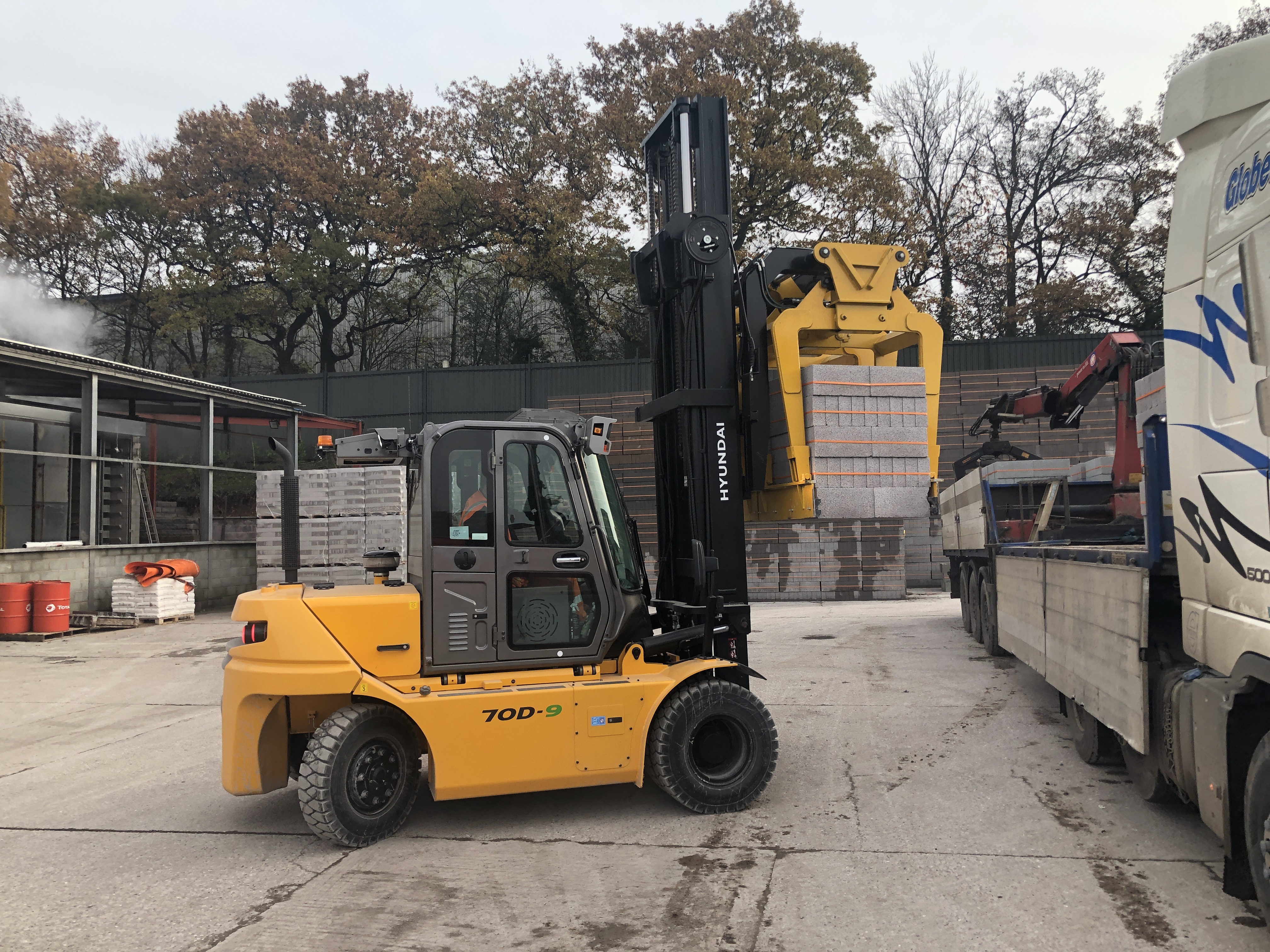 Mr Silvers reported that the feedback on the first truck was excellent - hence why a second machine has been ordered, he said “Besblock have been really pleased with the truck and its performance, they have reported that the 70D-9 and its Cummins engine out performs their existing equipment, whilst giving the driver the comfort and visibility needed for long operational shifts. Besblock have also commented on the additional benefits of now dealing with a local forklift truck supplier - service, support and response times have hugely improved.”

Besblock Works Manager, Pat Roberts has been with the company for 29-years, he began his career with the firm as Masonry Manager and became Works Manager five-years ago, his role allows input into the choosing the Besblock fleet. Mr Roberts reported, “We were very disappointed with the reliability of the previous brand of trucks and the downtime experienced through the regeneration process. We looked at what else was available. The Hyundai offered an excellent alternative, complete with Adblue, which meant the machines were able to operate without downtime.”

Mr Roberts added, “The tilting cab makes it easy to access the machine for servicing, which is an excellent feature. The simplicity of the Hyundai also impressed me alongside a very good price and its reliability.”

The company also own another Hyundai fork truck, a HDF30-2, which is in the region of 20-years old! “The truck is still going strong with 67217 hours on the clock,” said Mr Roberts. “Now if that’s not proof of a good workhorse!”

Mr Roberts concluded, “The operators like the new 7 tonne truck – the visibility is particularly good. Back up is also a big thing for Besblock and Compact Fork Trucks provide us with a service contract.”

Finally, Besblock were kind enough to recommend Compact Fork Trucks to another block manufacturing company which Compact Fork Trucks were delighted about. They recently sold them the same model of machine with a very similar specification. You can’t get a better recommendation than that!

For more information or to arrange a free site survey, please contact the Compact Team on 01384 238000 or info@compactforktrucks.co.uk.